—The show opened with highlight packages showing old clips of past Great American Bash shows. The video transitioned to a preview of tonight’s matches and highlighted the first-time meeting between my favourite Io Shirai vs. Sasha Banks. There was a red, white and blue themed set with balloons and cars on opposite sides. Mauro Ranallo, Beth Phoenix and Tom Phillips were calling the show.

Nox delivered a pair of running elbow and followed with a cannonball to Kai for a two count. Nox caught Kai coming off the ropes with a bridging Fallaway Slam for a two count. Kai responded by hitting the Kai-Ro-Practor but Nox kicked out. Nox went for the Shiniest Wizard but Kai caught her in a Submission hold. Nox free delivered and delivered the Molly Go Round and followed with the Shiniest Wizard for the 1,2,3.

[Amin’s Analysis: This was a solid action-packed match as there were lots of cool sequences leading to the finish. A great outing from Yim here who delivered one of her finest performances. The finish was surprising considering Kai was on a roll and called out my favourite Io Shirai to a match. I’ve mentioned this in my NXT Primer for PWTorch that Nox has a great babyface story to tell coming off her injury. It will be interesting to see when they announce the match as it should be great. Nox is a talented wrestler but my favourite Io Shirai is on such a role right now as she shouldn’t lose her title anytime soon.)

—Backstage, Damian Priest spoke to McKenzie Mitchell about Cameron Grimes for slashing his tires, attacking him in the parking lot but not owning up to it. Priest challenged Grimes to a match and noted the beating he gives him will last forever.

[Amin’s Analysis: This was solid as Lorcan and Thatcher worked a different style of match beginning with some submission hold, transitioning to a physical strike exchange. Lorcan’s a great wrestler bring a very aggressive style as he was the perfect opponent for Thatcher to showcase his hard-hitting/submission style. Overall, a very solid match.]

—Next was an awesome highlight package on Karrion Kross and Scarlett.

Stone held Ripley’s leg as Aliyah delivered a running boot for a two count. Aliyah went for an Octopus Hold but Ripley countered with a face buster but Stone broke the count. Stone went for a plancha but slipped on the rope falling to the floor. Ripley delivered a German Suplex to Aliyah. Ripley went for Stone but Aliyah stopped her with a chop block. Aliyah and Stone applied a stereo Crossface/Boston Crab but Ripley broke free.

[Amin’s Analysis: This went a bit long but was fun and satisfying for the story they told. This worked because Stone was great in his role. Ripley who’s a solid wrestler did a great job playing off both Aliyah and Stone.]

Stone attacked Lumis before the bell rang. Lumis no-sold it as he placed the strap on Strong’s wrist as the match began. Lumis yanked Strong over the ring steps and then opened the truck of the Dodge Viper. Strong made his comeback delivering an Olympic Slam to Lumis on the floor. Strong attacked Lumis with a strap.

Strong charged but Lumis countered with a lariat.Lumis connected with a running bulldog for a near fall and followed with a Slingshot Suplex. Lumis whacked Strong with a strap. They battled for position on the turnbuckle as Strong connected with a Superplex to Lumis for a two count.

Strong applied a Boston Crab but Lumis rolled to the floor. Bobby Fish came out and delivered a running kick too Lumis as Strong followed with a Buaizuku Knee for a close two count. Lumis shoved Strong as Fish bumped into the Plexiglas. Lumis delivered the Bossman Man Slam and then applied Silence as Strong tapped.

—PRIME TARGET: Tom Phillips hyped the Winners Take All match between Adam Cole and Keith Lee. Lee spoke first why this is the biggest match of his career and spoke about his connection with the WWE Universe. Lee said he has the chance to hold both the NXT and North American Titles. Lee noted NXT is NXLee. Lee noted he earned the opportunity and called Cole’s reign epic and legendary.

Cole spoke next about Lee’s performance at the Survivor Series and facing off with Brock Lesnar at the Royal Rumble. Cole noted none of this would’ve happened if he didn’t lead the charge of the NXT Invasion. Cole noted he will be holding both the NXT and North American Championships.

Lee noted when the dust settles he will be double champion. Cole spoke about prevailing when the chips are down. Cole noted he will take it all and that’s Undisputed. Lee noted Cole may be undisputed, but called himself unstoppable. Cole called this the biggest match in NXT history. Lee said that’s all he’s been working for.

[Amin’s Analysis: These Prime Target special are terrific as they do a great job hyping up the championship matches and making them feel important. Looking really forward to the match as it should be excellent. From the soundbites it feels like Lee is going to win. Having said that, Cole has been on such a role as NXT Champion as I feel it still isn’t time for him to loss. It feels like Kross will be the first to challenge the winners as programs with both Cole and Lee have been teased.]

—Next was an awesome highlight package on Finn Balor sponsored by Mountain Dew.

—Johnny Gargano was shown backstage with LeRae as she wasn’t happy with the outcome of her match. Gargano spoke but stopped as brawl between LeRae and Yim broke out. WWE officials appeared to split LeRae and Yim apart. Gargano and Isiah “Swerve” Scott had a brief confrontation as well in the melee.

–NXT Cruiserweight Champion Santos Escobar made his way to the ring with Joaquin Wilde and Raul Mendoza. Santos spoke about the tradition of the Lucha Libre culture which transcended the wrestling ring. Santos noted it now turned into side show. Santon noted people were led to believe that Lucha Libre was a bunch of guys in mask doing flips.

Santos noted they were more than a mask and will rediscover the true roots in his image. Santon noted they are going to restore the honor and leave a legacy they are proud of. Drake Maverick came out as he went after, Santos, Mendoza and Wilde. The numbers were too much until Fandango and Tyler Breeze came out to make the save. Fandango challenged them to a six-man tag team match.

[Amin’s Analysis: Santos has been terrific as he presents himself as star and continues make both the Cruiserweight Title and division as a key part of NXT. Maverick continues to play great in part as the babyface who refuses to quit. Waiting to see when Scott, Jake Atlas and one of my favourite wrestlers KUSHIDA gets added into the mix to challenge Santos.]

—McKenzie Mitchell interviewed Cameron Grimes backstage who mocked Priest voice. Grimes was hyped and claimed he will be the first to challenge the winner of Cole vs. Lee. 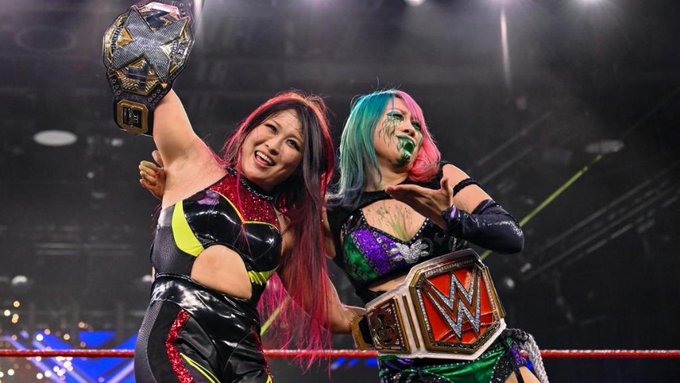 Banks came out in a car with Bayley and her dog who looks very cute. My favourite Io Shirai entrance is amazing and seeing her as NXT Women’s Champion makes it even so much better.

The match began with a nice counter exchange between Banks and Shirai. Shirai took control as she connected with a reverse double kick and followed with a missile dropkick as Banks rolled to the floor. Shirai delivered a tope to Banks on the floor. Shirai said “This is My N-X-T.” Shirai nailed Banks with a Slingshot Double Knee for a two count.

Shirai went to climb the turnbuckle but Banks honked the car horn. Off the distraction, Banks draped Shirai on the turnbuckle for a two count. Banks connected with a running double knees for another two count. Banks delivered a sliding Meteora but couldn’t keep Shirai away. Shirai made her comeback delivered a tilt-a-whirl head scissors and then followed with a Super Frankenstiner.

Shirai delivered a flapjack and then nailed Banks with a Tiger Feint Kick. Shirai delivered a beautiful Springboard Missile Dropkick but Banks kicked out at two. Shirai went for a Cradle German Suplex, Banks went to land on her feet but timing was slightly off. Banks countered a Butterfly Backbreaker into the Bank Statement but Shirai broke free. Shirai applied a Victory Roll, transitioned and delivered a double stomp to Banks.

Shirai hit a running double knees, went to climb the turnbuckle but Banks placed her in the Tree of Woe. There was a neat spot as Banks played heel as Shirai responded by nailing her with a right hand. Banks charged but Shirai moved out of the way. Banks moved as Shirai landed on her feet on a Moonsault attempt. Banks connected with a flying Meteora for a close two count.

Shirai was on the ring apron as Banks was inside the ring as they exchanged big strikes. Shirai went for a Springboard but Banks counted with a leaping knee strike. Banks charged and delivered a Sunset Bomb ramming Shirai into the Plexiglas. Banks went for a Frog Splash but Shirai caught her and applied a Crossface. Shirai looked to have the match won but Bayley handed Banks one of the WWE Women’s Tag Titles.

Bayley distracted the referee as Banks tried to use other title. Suddenly, Asuka appeared from underneath the ring and blew green mist into Banks face. Shirai applied rollup but Banks kicked out. Shirai nailed Banks with a huge palm strike. My favourite Io Shirai climbed the turnbuckle, delivered her most beautiful looking Moonsault for the 1,2,3.

[Amin’s Analysis: As expected this match was excellent as both my favourite Io Shirai and Sasha Banks were terrific here as they worked very hard and delivered a terrific main event with no build. I would love to see a rematch between these two and get the proper build for the match. Banks has been on a role as of late and what’s really great as she’s once again reminding everyone how great a wrestler she is. Now, I want to give my main thoughts on the presentation of this match which I liked and worked. I mentioned in my NXT Primer for PWTorch, that I could see Asuka getting involved which she did and was nice to see her back on NXT as she had the best and most important run as NXT Women’s Champion. The finish was great as it kept Banks strong and build up the Raw Women’s Title match with Asuka for Extreme Rules. This also worked as they gave us a tease of a possible WWE Women’s Tag Team Championship match between my favourite Io Shirai and Asuka vs. Banks and Bayley. Most importantly, I enjoyed the finish as my favourite Io Shirai got her first big win as NXT Women’s Champion and helps to continue to present her as the top star in the NXT Women’s Division. Overall, this was tremendous. Two thumbs up for angles, the right finish and present my favourite Io Shirai as the top star on NXT.]

[OVERALL THOUGHTS] A very good wrestling heavy show as the matches delivered from start to finish. Next week’s show should be great as well and it will interesting to see if they announced either my favourite Io Shirai first NXT Women’s Title defence or a WWE Women’s Tag Team Championship match with Asuka against Bayley & Banks. Overall, a great show as the main event was simply excellent as it’s so great to see my favourite Io Shirai presented as the top star on NXT.